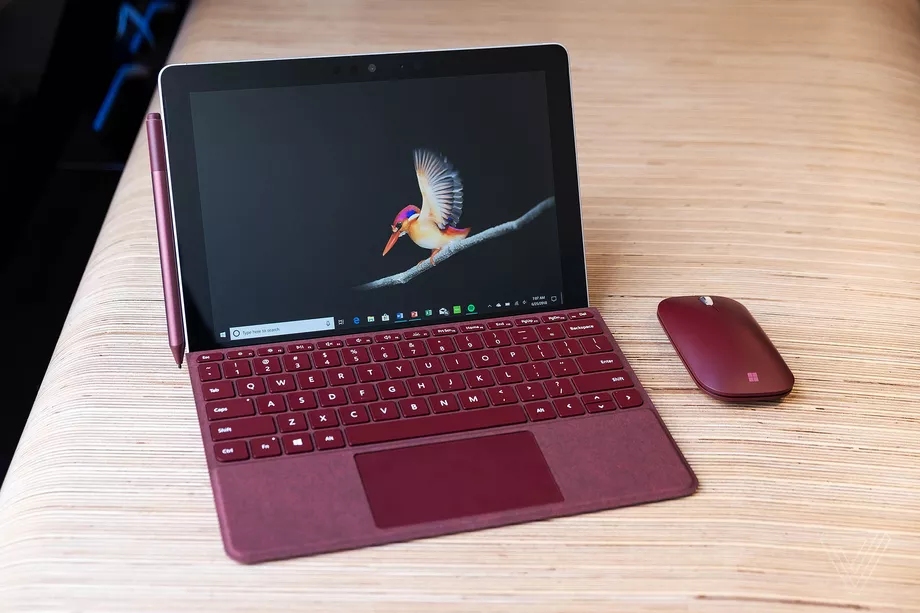 Microsoft is getting back into the cheaper tablet game today with the new Surface Go, a smaller, less powerful take on the popular Surface Pro device. The Go features a 10-inch screen, integrated kickstand, Windows 10, and a similar design to the Surface Pro, and starts at $399. It is available for preorder starting July 10th and will ship in August.

The Surface Go doesn’t change Microsoft’s Surface design philosophy one bit — it really just looks like a smaller version of the Surface Pro design that’s been around since 2014’s Surface Pro 3. It has a 3:2 aspect ratio display (1800 x 1200 pixel resolution), the signature built-in kickstand with unlimited positions, a front-facing camera with facial recognition login, and Microsoft’s proprietary Surface Connector port for charging and connecting to a desktop dock. Microsoft has added a USB-C 3.1 port, capable of charging the tablet or outputting video and data to external devices. It has also rounded the corners a bit compared to the latest Surface Pro, but overall, it’s the same familiar magnesium design Surface users have come to expect.

The Go’s 3:2 touchscreen should make it easy to use in landscape mode for productivity work, and it supports all of the split-screen and multitasking modes available in Windows 10. It will be a little more awkward to use in portrait orientation than the iPad, but it’s still better than tablets with extra-wide 16:9 displays. The Go weighs 1.15 lbs, which is a little heavier than the iPad and about half a pound lighter than the Surface Pro. Like the Pro, the Go has rather large bezels surrounding the screen, which seem even larger with the Go’s smaller display. The bezels do provide a place to hold the tablet and allow for a wider keyboard attachment, but they also make it look much more dated compared to the latest versions of the iPad.

Also like the Surface Pro, the Surface Go has an optional keyboard cover (available in four colors), and works with the optional Surface Pen. Microsoft says the Surface Go Signature Type Cover provides “laptop-class typing” with a scissor key mechanism and 1mm of key travel. The trackpad is actually larger than the trackpad on the current Type Cover for the Surface Pro. Adding the keyboard will bump the price of the Go up $99 or $129, depending on color, while the Pen will add another $99. Rounding out the accessories is the new $34.99 Surface Mobile Mouse, an ambidextrous, two-button Bluetooth mouse with scrollwheel. It is available in silver, red, and blue color options to match the keyboard cover and pen.

Inside, the Go has Intel’s Pentium Gold 4415Y processor with either 4 or 8GB of RAM and 64 of eMMC storage or a 128GB SSD. The processor is a dual-core seventh-generation model, which Microsoft says was chosen because of its balance between performance, battery life, and thermal properties that allow for a thin, fanless design. The company says the Go has up to nine hours of battery life as a result. We’ll reserve judgement until we’re able to review the Go, but the processor is where I have the biggest reservations when it comes to device performance. It’s not a hugely different processor from what’s found in many midrange Chromebooks, but instead of just having to push ChromeOS, it will have to run Windows on the Surface Go. Microsoft will initially release Wi-Fi versions of the Go, with an LTE equipped model to come later this year.

Out of the box, the Go runs Windows 10 with S mode enabled, so it only has access to the Edge browser and apps available in the Microsoft Store. Like other devices that come with S mode, such as the Surface Laptop, owners will be able to switch to the full version of Windows 10 for free if they want.

Microsoft might have a challenge finding the right customer for the Surface Go, as it straddles the line between a consumption device like Apple’s $329 iPad and a more powerful (and more expensive) productivity tablet like Microsoft’s own Surface Pro or the iPad Pro. Compared to the standard iPad, the Surface Go will be challenged by Apple’s deep bench of apps designed for touchscreens and entertainment, as Windows 10 still lags far behind when it comes to touch optimized apps. For use as a dedicated productivity machine when paired with the keyboard attachment, the Go’s lower-end processor might not be powerful enough to really work well as an everyday computer.

It seems like Microsoft is targeting the person that uses an iPad with a Bluetooth keyboard instead of a laptop, but doesn’t rely on it enough to pony up for the iPad Pro or the even more expensive Surface Pro. The Surface Go will provide that person with access to the full Windows 10 experience, along with Microsoft’s full Office productivity suite, while still being significantly less expensive than the Surface Pro. We should be able to find out the answers to these questions and more when the Surface Go hits shelves next month.

Correction: The $399 Surface Go has 64GB of eMMC storage, not SSD as previously stated.