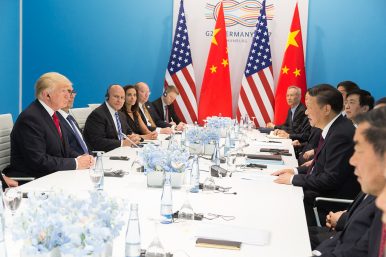 Trans-Pacific View author Mercy Kuo regularly engages subject-matter experts, policy practitioners and strategic thinkers across the globe for their diverse insights into the U.S. Asia policy. This conversation with Gary Hufbauer – nonresident senior fellow at the Peterson Institute for International Economics and most recently the Institute’s Reginald Jones Senior Fellow (1992-2018) and author of Bridging the Pacific: Toward Free Trade and Investment between China and the United States (2014) – is the 146th in “The Trans-Pacific View Insight Series.”

What would China lose in an all-out trade war between the United States and China?

Both countries will lose in an all-out trade war, but the losses will differ in kind and amount. An all-out trade war could cut China’s exports to the United States by about a third, some $200 billion annually. Eventually, Chinese firms will find new markets and create new products to take up the slack. But for a period of two or three years, the disruption to workers and firms will be enormous. As many as 4 million Chinese workers could be laid off, and many Chinese firms will go out of business. However, by calling on the Chinese people to do their “patriotic duty” and resist U.S. economic aggression, President Xi will diffuse the political backlash within China.

What would the United States lose?

If U.S. exports are cut by a third in an all-out trade war, the United States will lose about $50 billion of exports annually. About 250,000 U.S. workers will lose their jobs. The political pain in the United States of these job losses will be severe. The media will pay a lot of attention to firms that lose sales and to workers who are laid off. President Trump will not be able to diffuse the political backlash by calling on Americans to be patriots and accept their economic hardships.

Explain the potential impact of a bilateral trade war on global supply chains.

If U.S. firms can see no end of the trade war, they will reorganize their supply chains and locate low-cost production in “safe” countries like Vietnam, Malaysia, Indonesia, Mexico, and Peru. They will not move much production back to the United States. Likewise, Chinese firms that buy high-tech industrial inputs from the United States will move some of the production to “safe” countries like South Korea, Canada and Australia. But the Chinese government will strongly encourage Chinese firms to produce many of these inputs at home, even though the cost will be much higher.

The deficit rationale makes no sense, for three reasons. First, the trade deficit is an inevitable by-product of a robust U.S. economy, a large U.S. fiscal deficit, and a strong U.S. dollar. It should not be a policy priority. Second, if the trade deficit is a policy priority just because Trump says so, then he should ask Congress to raise taxes to curb the fiscal deficit and he should ask the Federal Reserve to reduce the value of the dollar against the euro, the yen, the RMB, and other important currencies. And third, evidence shows that high tariffs and other protectionist policies do not reduce trade deficits. But those policies do create a lot of waste and economic dislocation.

Describe a worst case plausible scenario of how a U.S.-China trade war would impact the global trading system.

If the United States and China dive into an all-out trade war, hitting all imports from the partner country with tariffs of 25 percent as threatened, the world economy could well suffer a recession. The reason is not just the disruption of trade but more important the erosion of business confidence. In a trade war scenario, multinational corporations will postpone investment decisions and “hunker down” as they try to figure out what comes next. Who knows what happens to the international economic order when the two largest economies clash? Who can predict how long before normal trade relations are restored? With so much uncertainty, global investment falls, companies hoard cash, and the real economy suffers.